Lock ideally supports shared Lock but it depends OS if OS doesn’t support share lock then it will act as exclusive locking. Locking applied on File not per channel or thread means if channel obtained the exclusive lock then other JVM’ channel will be block till first thread channel resume the lock.

Locks are associated with a file, not with individual file handles or channels Locking applied on File not per channel or thread means if channel obtained the lock before processing the file then other JVM’ channel will be block till first thread channel resume the lock. Since Lock is on File therefore it is not advisable to use lock on a single JVM.

The FileLock (long position, long size, boolean shared) acquire lock on specified part of a file. The region of file specified by beginning position and size whereas last argument specified if lock is shared lock (value True) of exclusive (value False). To obtain the shared lock, you need to open file with read permission whereas write permission require exclusive lock.

We can use lock () method to acquire lock on whole file not the specified area on file. File can grow therefore we need to specify the size while obtaining the lock.

Method tryLock on specified area or on full file doesn’t block/hold while acquiring a lock means it immediately return value without going to wait to acquire lock. If other process already acquired lock for specific file then it will immediate return null.

FileLock API specified as below.

FileLock lifecycle will start when lock method or tryLock invoke from FileChannel and end when release () method called. It FileLock also invalid if JVM shutdown or associated channel closed.

isShared() method return whether lock is shared or exclusive. If shared lock is not supported by operating system then this method always return false.

Finally, overlaps(long position, long size) return if lock overlap the given block range or not.

In Java’s earlier version, It uses FileSystem conventional API to access system file. Behind the scene JVM makes read () and write () system call to transfer data from OS kernel to JVM. JVM utilize it memory space to load and process file that causes trouble on large data file processes. File page convert to JVM system before processing the file data because OS handle file in page but JVM uses byte stream that is not compatible with page. In JDK version 1.4 and above Java provides MappedByteBuffer which help to establish a virtual memory mapping from JVM space to filesystem pages. This removes the overhead of transferring and coping the file’s content from OS kernel space to JVM space. OS uses Virtual Memory to cache the file in outside of Kernel space that could be sharable with other non-kernel process. Java maps the File pages to MappedByteBuffer directly and process these file without loading into JVM. 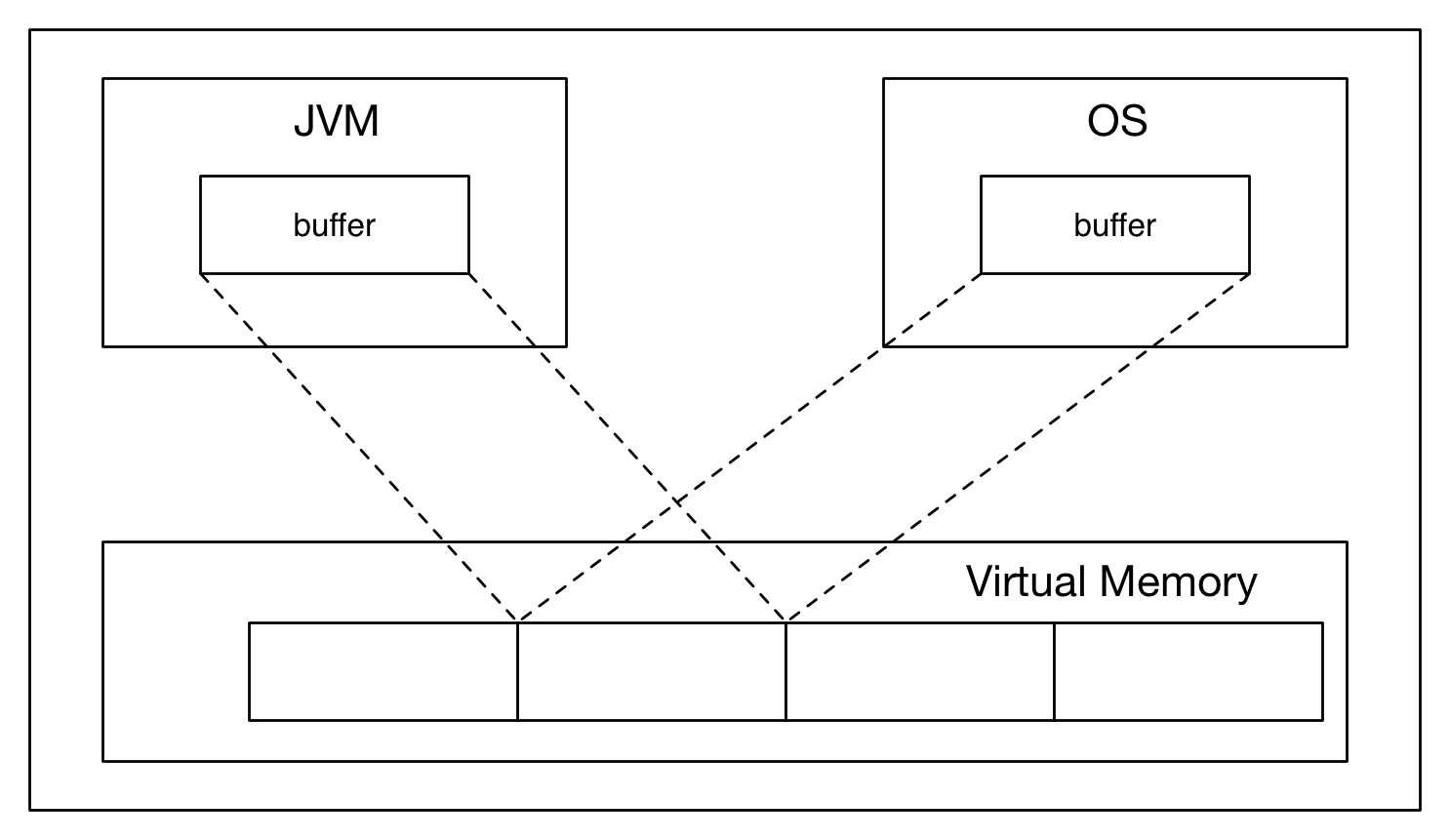 Below some of the key benefits of MappedByteBuffer:

Note: JVM invokes the shared VM, page fault generated that push the file data from OS to shared memory. The other benefit of memory mapping is that operating system automatically manages VM space.

As per above code map () method on FileChannel pass the arguments as mode, position and size and return MappedByteBuffer for part of file. We can also map entire file by using as below

If you increase the size larger than file size then file will also become large to match the size of MappedByteBuffer in write mode but throw IOException in read mode because file can not modified in read mode. There are three type of mapping mode in map() method

MappedByteBuffer will also not be visible to other programs that have mapped the same file; instead, they will cause private copies of the modified portions of the buffer to be created.

Below sample code show how to use MappedByteBuffer

Channels provide direct connection with IO to transport data from OS ByteBuffer and File or Sockets. Channel uses buffers to send and receive data, which is compatible with OS ByteBuffer and minimize the overhead to access the OS’s filesystem.

A channel provides open connection to I/O such as network socket, file etc. to read and write operations. Channel could not directly open but could be open by calling open method on RandomAccessFile, FileInputStream, or FileOutputStream object. A Channel interface provides close method and once channel closed it could not able to reopen and throws exception ClosedChannelException.

Below is the Channel interface

Channel interface depends upon operating system native calls provide by OS provider. It provides isOpen () to check is channel is open and close () to close the open channel,

The InterruptibleChannel interface is marker that could be asynchronously closed and interrupted, means if a thread is blocked in an I/O operation on as interruptible channel then thread may invoke close method asynchronously.

RedableByteChannel interface have read (ByteBuffer) method that reads sequence of bytes from channel into the buffer passed as argument. Only one thread can invoke read operation and if other thread initiate that time it will block until the first operation is complete.

A Channel handle communicates with I/O in both direction similar to InputStream and OutputStream. It is capable to handle concurrent write & read, means it doesn’t block I/O to be read or write.

A Buffer is abstract class of java.nio, which contains fixed amount of data. It can store data and later retrieve those data. Buffer has key three properties:

There is one subclass of this class for each non-boolean primitive type e.g. CharBuffer, IntBuffer etc. Buffer is abstract class that extended by non-Boolean primitive that provide common behavior across the various Buffers as shown below.

A buffer is a linear, finite sequence of elements of a specific primitive type wrapped inside an object. It constitutes date content and information about the data into single object. Data may transfer in to or out of the buffer by the I/O operations by a channel at the specified position. The I/O operation can read and write at the current position and then increment the position by the number of elements transferred. Buffer throws BufferUnderflowException and BufferOverflowException if position exceed while get operation or put operation respectively. The position field of Buffer specified the position to retrieve or insert the data element inside Buffer. Limit fields of Buffer indicates the end of the buffer which can be set using below operation

Flip method set the limit to the current position and position to 0.The rewind () method is similar to flip () but does not affect the limit. It only sets the position back to 0. You can use rewind () to go back and reread the data in a buffer that has already been flipped.

ByteBuffer is similar to OS ByteBuffer that could be mapped to OS’s ByteBuffer without any translation. ByteBuffer uses Byte core unit to read and write IO data, which is more significant, compare to other primitive data type buffers.

Byte buffers can be created either by allocation, which allocates space for the buffer’s content, or by wrapping an existing byte array into a buffer.

A direct buffer could be created by allocateDirect factory method, which is more expensive, and therefore it is advisable to use direct buffers only when they yield a measureable gain in program performance.

Whether a byte buffer is direct or non-direct may be determined by invoking its isDirect () method. This method is provided so that explicit buffer management can be done in performance-critical code

So there were two key challenges in existing old JDK

For large file OS uses Virtual Memory to store data outside of RAM. The benefit of Virtual Memory is that it is sharable across multiple processes and hence VM could be accesses by OS and JVM both. From transferring data from OS to VM could be quite fast by using DMA (Direct Memory Access) whereas transferring data from VM to JVM is slow because JVM does extra efforts to break large data buffer to byte stream.

The Virtual memory read paging content from disk and uses page fault to synchronize the file data to Virtual Memory. Once pageins completed FileSystem read the file contents and its Meta information

JAVA NIO that introduce JDK 1.4 and keep enhancing on newer version improve the I/O operations. It provides new type of buffers such as ByteBuffer, CharBuffer, and IntBuffer etc. that reduce the overhead during transferring data from OS to JVM. Java NIO could be able to map directly from VM to JVM bye using new ByteBuffer. JAVA ByteBuffer is same as OS Byte Buffer that’s why it could be easily mapped from OS Byte Buffer to JVM Byte Buffer so less overhead on data conversion from OS to JVM.

As per above diagram if OS uses VM and JVM use newly NIO interface, it enhances the performance while processing file especially large file. We will also discuss later there are another MappedByteBuffer which have capabilities to directly process the file in VM without transferring data from VM to JVM.

A Collection represents a group of objects known as elements. Collection framework is basically group of interface with some specific implementation to manage elements of collection. END_OF_DOCUMENT_TOKEN_TO_BE_REPLACED